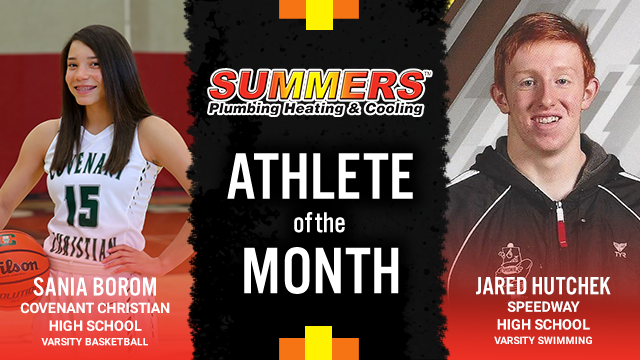 Want to nominate an athlete for your school next month? Click here to do so!

Sania has really stepped into a leadership role this season for our team. She has become more of a vocal leader, and has found a way to lead by example as well. In our Christmas tournament (the Bostick), Sania scored 22 points in both games that day (Dec. 27th), leading the Lady Warriors to a win in the championship game over a tough Bethesda Christian team.

Jared is an outstanding young man and an excellent swimmer. He is a four year letter winner in our program, has broken one school record and is on the verge of breaking two more. He ranks #2 in the Senior class and is currently taking al Advanced Placement courses. He epitomizes the term “student-athlete”

Josh was selected as one of the best 100 football players in the Country to play in the Army All-American bowl.

Josh has been a top-tier offensive lineman for Beech Grove, and is committed to playing at Ohio State University.

Hannah always comes to practice prepared and with a positive attitude. She leads by example and is one of our team captains for this season. Hannah is a multi-sport athlete and is involved in many extra curricular activities at Beech Grove. She is on academic honor roll and gives her best in the classroom and on the court. She has been a part of the Beech Grove girls basketball program since elementary school and has worked very hard over the years to get where she is.

Gabby is a consitent leading scorer for the Braves, and has a great 3 point shot. She’s often leading the team.