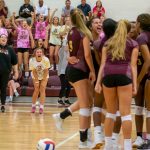 Kathryn Haughs has been named Brebeuf Jesuit’s new Head Girls Volleyball Coach. Born and raised in Carmel, Indiana, she was brought up in the volleyball world. Kathryn attended Cathedral High School where she was a four-year varsity volleyball player. While at Cathedral, she was able to help her team to two state championships, as well as earning National Catholic Team of the year. She was voted Most Valuable Player, earned

No Events This Week

Events are added by athletic staff.
View All Events